There’s no way to avoid saying it. Ice is cool. Small wonder so many video games incorporate icy landscapes into their designs and in this list IGCritic presents the top 10 Ice levels in video games.

We will be judging these entires by graphics, influence on gameplay, and relevance to the plot through themes and subtext. 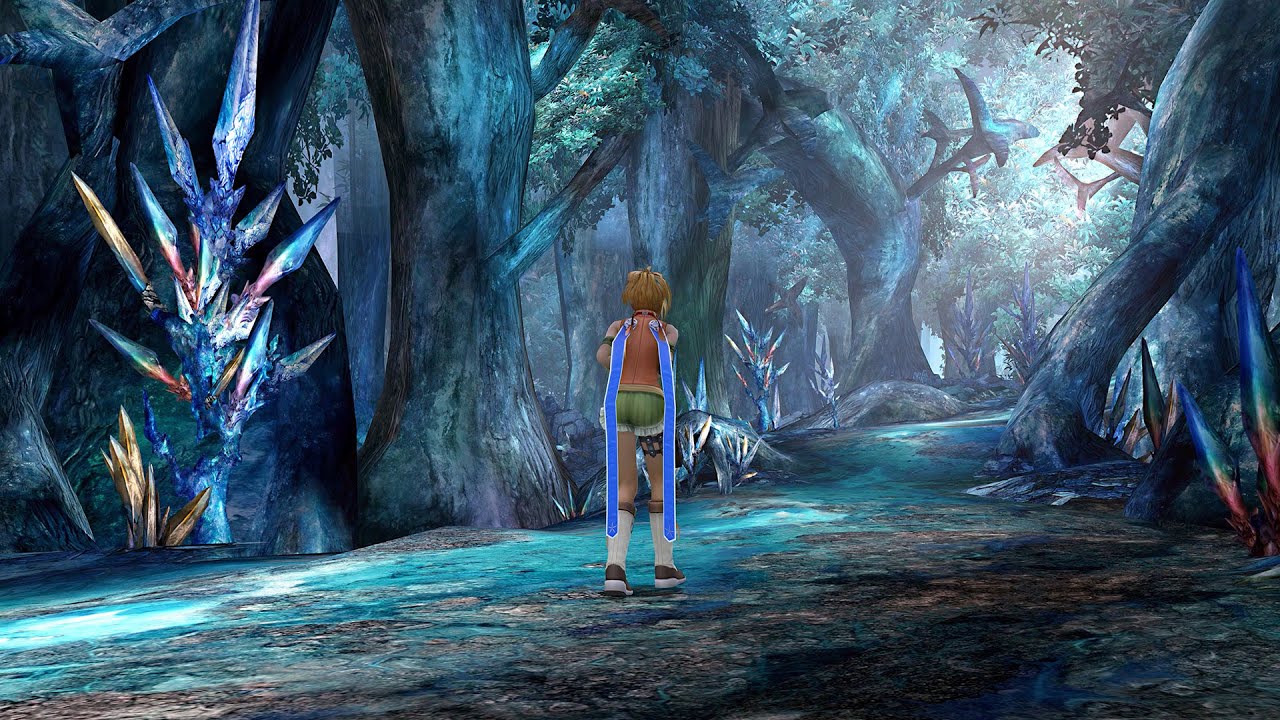 Spira has many geological phenomenon. There’s the thunder plains, the river of pyre flies, the Sanubia sands and the expanse of Macalania. The deeper you venture into Macalania, the ice cold harsh of this land intensifies, though maybe not as harsh as the temple cloister of trials. I hate that bit. Our focus however is the outskirts of this winter tundra, the Macalania woods. An ice level where frost grows in co-habitation as part of the local flora.

The trees reach skyward, interlocking pathways of wood and frost, secluding an oasis of beauty and secrets. Though the Sun never sees this place, it is certainly not dark. The forest is a balance of cold and sphere stuff in perfect harmony, forming a magical labyrinth of lights. There is only one frozen facet more entrancing than this miracle of magical nature, and that’s the aeon Shiva. But top ten ice witches is another list. 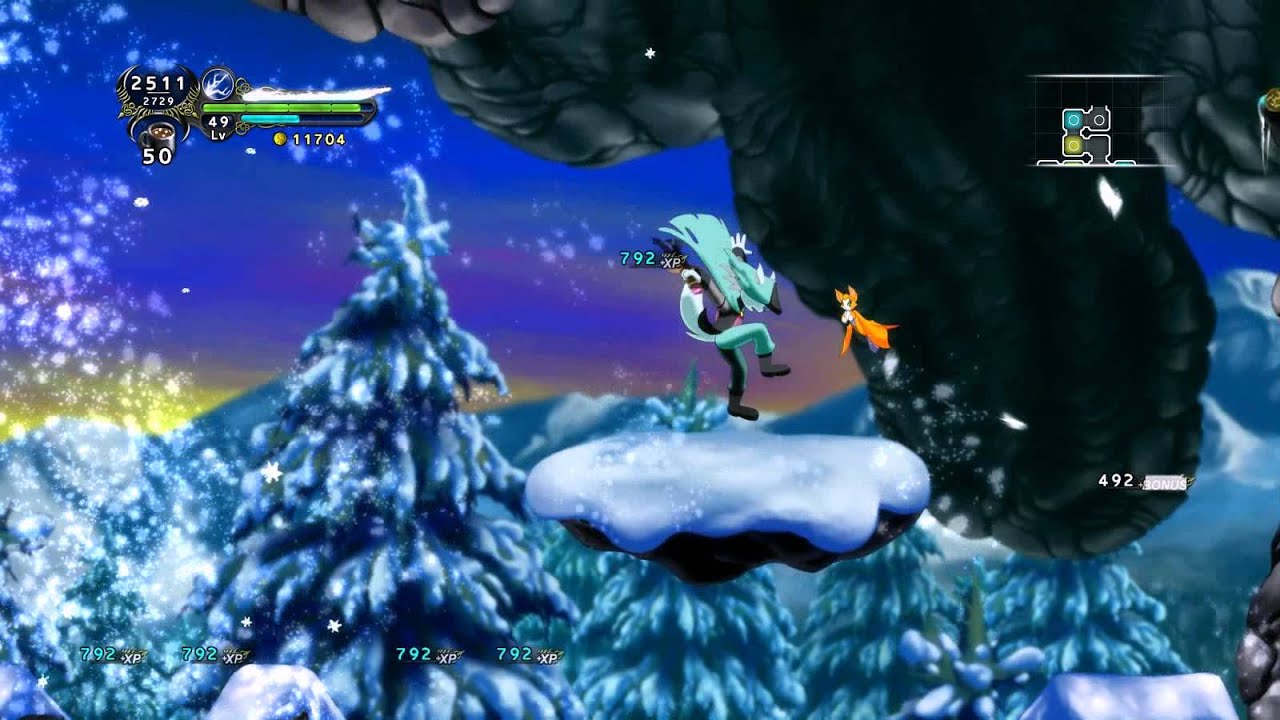 In the Anime style side scrolling Dust: An Elysian Tail, to complete your adventure to it’s climax you will need to traverse the Blackmoor Mountains. As mountainsides go there is much to appreciate. This level is alive with stunning attention to detail, the trees shivering in the breeze, branches laden with fresh drift and the audible crunch of snow underfoot. As you continue climbing through an ever increasing gale, as it starts snowing sideways, it only gets more perilous and I’m not just referring to the monsters.

While the path up the mountain maybe treacherous, that doesn’t stop our heroes from enjoying a small sense of adventure. The weather is laying it on so thick, you will need an avalanche to clear the path. This mountain is nippy, outside and in, as Blackmoor is layered with caves harbouring an inner chill. When you do reach the summit, all is somber silence. The eerie tranquility compliments Dust’s recently found inner peace but hints at a deeper revelation. It’s funny how games have a way of hiding secrets in the snow.

8) The Ice Zone from Ecco the Dolphin

Just because it’s a classic on a 16bit console doesn’t mean it’s not brilliant. After his pod and schools of other marine life are taken by unknown forces, for who knows why, Ecco is determined to search the entire ocean, for a way to re-unite with his abducted family. The song of the sea inhabitants lead him to the Ice Zone in search of the great and wise whale who makes this place his home, who may know something to help.

The frigid waterways of the arctic are a trial indeed. In these frigid depths there is no direct route, as should be expected with underwater glaciers. Playing through this frozen kingdom beneath the waves feels other-worldly. It makes a change to see the sea not as a human would experience, but how sub-marinal life would. Furrowing through the mysteries of the deep not enough for you? What if I mentioned this dolphin has to fight off an alien invasion?! Combating an alien armada single-handed is overwhelming enough. Throw in sub-zero temperatures and this ice level is downright chilling to the bone.

7) Fortuna Castle from Devil May Cry 4 Seeking Dante for answers to the recent surge in Demonic activity, Nero leaves the city and follows his trail through the mines to Fortuna Castle, though inside its more like a cathedral.  The heavy weather diminishes visibility, but slowly clears to reveal Fortuna Castle looming on the horizon, looking not only cold, but dark, oppressive and foreboding of dangers yet to come. The swirling snow creates a shroud of terror that warns the player to stay ever alert.

After fighting Berial, the fire demon, it’s out of the frying pan and into the freezer. To reach the castle you must fight your way through the storm, as well as some ice demons, who love ice so much they have fashioned some into clawed weapons. The Gothic castle may seem cosy and roasty toasty but only at first glance. Venture out into the surrounding courtyards and there’s no telling what may jump out at you from the dark cold. Anything can be hiding in the snow, so expect the unexpected. 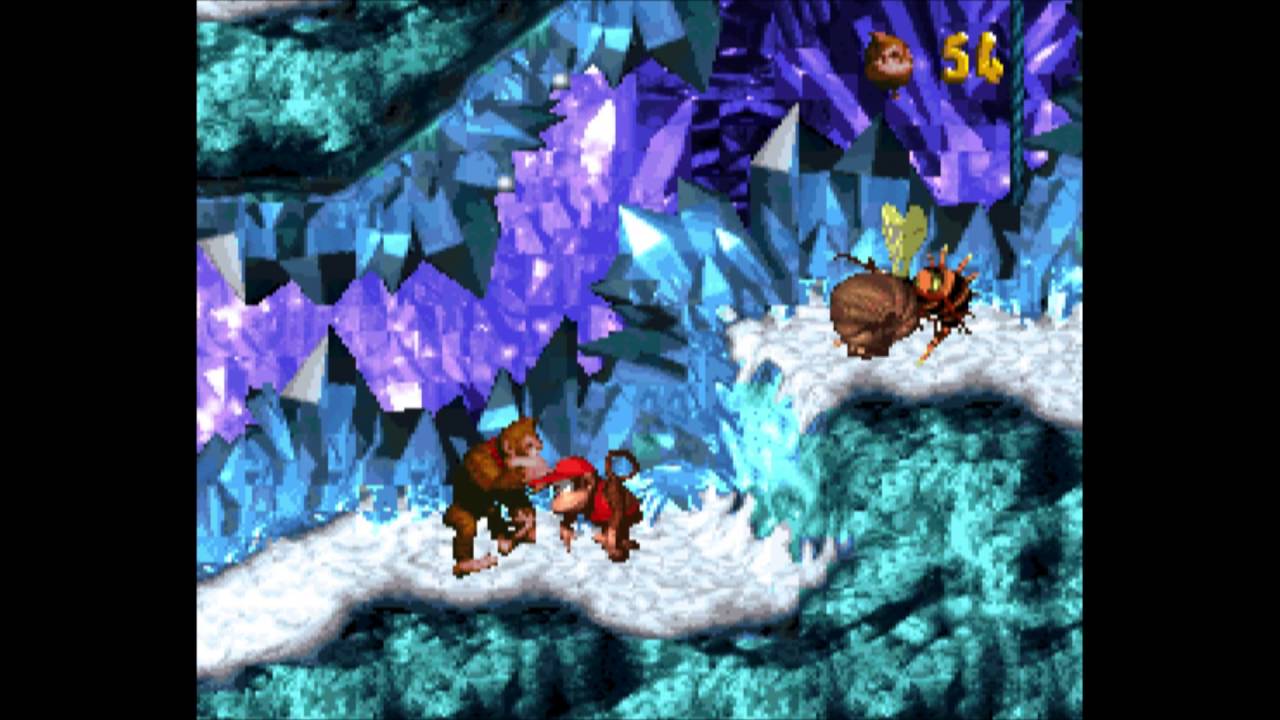 Donkey Kong Country is a tropical island paradise, filled with lush jungles, green pine woods and magical waterways. Venture high enough up the mountain and you will arrive at Gorilla Glacier. After playing through a collection of colourful escapades, you can’t help but notice the stark white contrast. Yet the most beautiful level of this map, and possibly the whole game, is Slipslide Ride. Filled with blue hue ice crystals gleaming with their own internal wondrous light.

As the name suggests everything here is slick. Even the ropes are icy. Blue slides up and purple slides down. The clear crystal aesthetic, coupled with the chipper chimes of the midi theme, is one of the most enchanting levels of the franchise, despite the inexplicable wasp infestation. 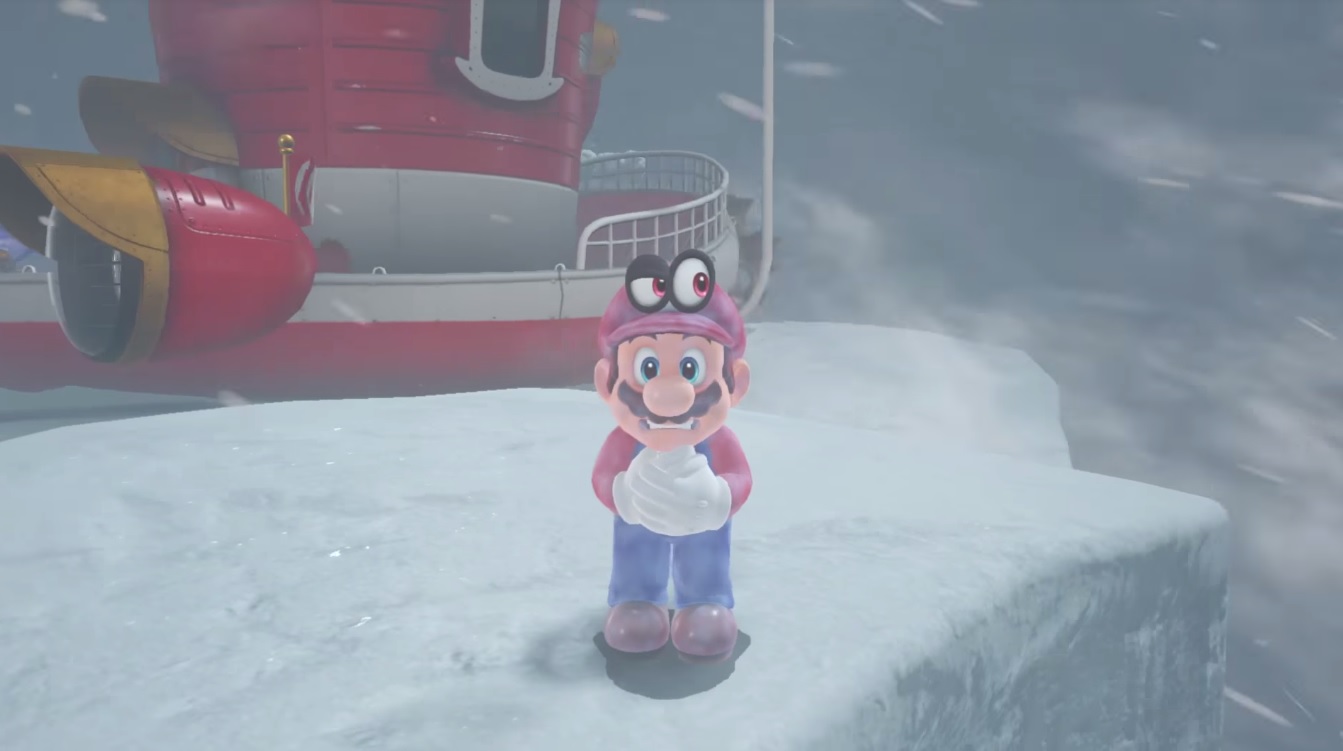 Super Mario Odyssey raised the bar in all our expectations of what a Mario game could be in every respect. Your first instance of ice-ness actually happens in the Dessert. Hidden beneath the sands there’s even a giant Ice Cave! Though stunningly beautiful, it doesn’t pass muster for us. Enter the Snow Kingdom of Shiveria. It’s a cold reception, the wind whipping at Mario pelting him with snow. In areas you need to clear away the snow with your hat before you can even progress.

Be careful where you swim, or you may just catch your death. Hyperthermia is not fun for anyone. It maybe cold on the outside but this hoar frosted town is strangely warm and inviting. As the slogan on your guide map states, it is “the warmest community in the coldest land,” though it does take some digging to find the warm part. The polar locals take advantage with the slipperiness of their situation by holding races, bounding around in contests, for which the prize is a frost frosted cake!

4) The Veil from Darksiders II

In search of the keeper of secrets, the horseman of Death must ride despair, great name for a horse by the way, across the Veil, a frozen wasteland surrounding a frosted crumbling fortress. Spikes of ice creep up the side of the mountain, wisps of wind flirt with the snow as it blows in streams across your path. After Earth’s fierce apocalypse in the first game, it’s a great way to start a sequel. The barren blank wastes towards a looming frozen fortification convey seriousness and finality as Death rides in with determined intent.

The journey through halls of bleak grey stone is barred by the frozen skeletons of warriors past, and a big monster. There’s always a big monster. Your reception by the keeper of secrets, master of the keep is as cold as, well, death. This ice level may be short and only serve as a platform for the tutorial and introduce the backstory of principle characters, but in terms of immersing gamers into the plot, it’s as bitter cold as they come.

3) Frozen Lake Town from Brothers: A Tale of Two Sons.

Picture it if you will. After traversing rocky crags and rivers of blood, sprinting for your life from an angry pygmy tribe, you narrowly escape on a paddle boat wading through a gloomy, dank cave.  And then the scene opens up onto a frozen lake, the setting sun glistening on the surface of glaciers and sea, thick with sheets of ice and home to giant orca creatures. Littered with bones of local wildlife, it’s a chilling wonder to behold.

After winding your ways through the frozen barricades, the brothers, Naie and Naia, come to a quaint little settlement, each cottage a warm invitation of safety. The setting would be almost picturesque if it wasn’t being terrorised by an invisible monstrosity. The inhabitants have literally frozen in fear! Bolting to safety under a sky of aurora lights, this level is a clear reminder of how something beautiful and inviting can hold unseen dangers.

2) Belly of the Whale Spirit from Never Alone

As the whole game follows a girl and her fox through the Alaskan wilderness, there’s plenty of ice levels to choose from. The whole game has taken the concept of cold and produced a huge variety of settings to explore and discover. The levels are littered with authentic local history, mythic folklore, cultural music and interesting wildlife, demonstrating how frozen landscapes have their own equilibrium of nature. So peaceful, so enchanting, so surprisingly full of evil spirits.

The ambience between the levels vary few and far between, from a horrific bear chase, to a tranquil swim with the spirits. Our chosen level for this spot, is inside the whale spirit. Contrasting the blustery normality of constant blizzards, this ice level is charmingly calm. Even the waters are still and serene. With a selection of spirits to guide you through, this is one of the few occasions where the enveloping cold imparts a sense of safety from the relentless grip of winter.

The northern most region of Tamriel. In this Mountainous Winter tundra, you’d be hard pressed to find an area that isn’t lost under a blanket of snow. Our top spot for ice levels goes to the town of Winterhold. A Jarldom situated on a cliff in a constant subarctic climate, over looking the “Sea of Ghosts,” or what would have been the Sea if not for the constant downpour of frost. It maybe small now, but it used to be a major capital city, much greater before half of it was lost when it fell into the sea during an event dubbed “The Great Collapse.”

Ruins of past dwellings line the cliffs edge of this once proud settlement. The only structure of the decimated half to survive the ravishing of the waves, was Winterhold College, the foundations of which are protected by powerful magic. Since that time all of Skyrim have given mages the cold-shoulder, associating all magic with deception, trickery and malicious resolve. Still reeling from the loss of friends, family, political standing and influence in the region, the whole outlook of the town is very bleak indeed.

Those were our top ten Ice levels in video games but perhaps you have a different opinion. Let us know which is your favourite winter wonderland in the comments on YouTube and remember to give a thumbs up and subscribe.