IGCritic now presents 7 sensational singers in video games. Video Games hold many gifts. The gift of joy, of adventure, of story and occasionally, the gift of song. Music can be a powerful tool, causing our hearts to swell with emotion and wisk us away on a wave of melody and magic. It takes a singer with real star power to grab us with that emotional hook, to use music in a way that empowers heroes, and make themselves truly endearing in the process.

Contrast – Kat with “House on Fire”

Contrast follows the escapades of Didi and Dawn through the 1920’s world of new discovery, jazz, and really bad lighting. The world is full of shadow people, who are unable to see and interact with Dawn, yet are integral to the events unfolding in Didi’s life. The night holds many secrets, all hidden in shadow, and it’s up to these two to shed some light, no pun intended, on the mysteries of Didi’s family history. While Didi constantly escapes the safety of her home to run off into the night, her mother, Kat, is working hard to make ends meet. To earn a living for herself and her daughter, Kat takes on the position of a lounge singer in the Ghost Note Night Club.

It may look like a seedy night club, and thats because it is, but that doesn’t stop Dawn and Didi from sneaking in to catch the show of sensational singers. Kat begins with her opening number: House on Fire. Her song is smooth, sultry and swinging. Some of the lyrics hit home hard with possible backstory. The song could be hinting at how the destructive tendencies of her husband have caused problems in the past, and then lo and behold, Johnny appears and interrupts everyones good time by dragging her offstage during her number for a private conversation. Rude, but worth every note.

Devil May Cry 4 – Kyrie with “Out of Darkness” In a time before electricity and television, the sound of song was more than simple entertainment. Religion has successfully carried this forward, using the music of sensational singers to soothe the soul and uplift the spirit by imparting their teachings to their followers. One particular successful sect is the Order of the Sword in Fortuna, who worship the Demonic Dark Knight Sparda as their lord and saviour. One of the orders disciples, Kyrie, is proud to help out in any way she can. Kyrie has faith in the order, along with her brother credo and long time sweetheart Nero. One of her favourite ways to contribute to the well being of the people, is to sing during congregations and gatherings. And what a gifted soul she is, bringing light into the hearts of the people in a time of fear.

With the threat of constant demonic attacks ever looming, the good people of Fortuna flock to the sound of her song like bees to honey. The joy she brings is apparent to all who hear her. This music is lighter than any hymn, it is bright, warm, and yet powerful and absolute. “Hear the devil’s cry of sin. Always turn your back on him… leading you back home, I will give my gifts to you.” The message is simple enough, demons bad, the order good. Believe in the order, give them your loyalty and you will receive safety, protection and other miscellaneous gifts. Yeah, that deal always ends well.

Rhapsody: A Musical Adventure – Cornet with “Thank You” 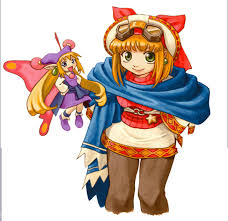 If your fav video game has just one original song written for it, even by todays standards its a rare occurance. This title however  managed to squeeze in a good 10 lyrical ballads. Kudos. A turn based strategy RPG on the ps one, Rhapsody a musical Adventure was enchanting in many ways. Though there is tons of readable dialogue to sift through, the game lives up to it’s title with some dandy vocalised ditties. Sweet and emotionally gripping, many of them will make your heart swell with warmth. Even the villains get in on the act. It’s a fairy tale story. A young girl falls for the handsome prince, only he is taken from her and turned to stone by an evil queen, who also has a thing for the future ruler. What a cougar. With the power of friendship, determination and song, Cornet quests after her love interest. All the songs help develop the story with an amazing orchestral score.

The most touching and emotionally charged song is the finale. When Kururu, your companion and life-long friend for the whole game reveals that her time has come and she has to go away, Cornet reveals she knows that Kururu is really the soul of Cornets deceased Mother, possessing this fairy toy and she doesn’t want her to leave. After they do say their goodbyes, Cornet sings “thank you” for her mother as the credits roll. Through her song she conveys the joy of all their adventures together, that it is hard to say goodbye, and that she believes they will be together again someday. They have shared the laughter and tears through all their trials and celebrations. This wraps up the adventure nicely with a feeling of emotional tenderness and hope for a brighter tomorrow. No matter what trials we face, there is always joy in the end.

It has been two years since High Summoner Yuna defeated Sin, commenced the Eternal Calm and subsequently lost her greatest love Tidus to the great beyond. She is initially known for being reserved, quiet, and dutiful to a fault. Even her run onto the battlefield was dainty. She was raised to sacrifice her own life for the greater good. After ridding the world of it’s greatest fear and at the same time, debunking the most powerful religion, she decided to stay out of the public eye, leaving Spira to build itself back up, avoiding politics and any attempts to be roped into a position of authority. When ff fans saw the opening scene of Final Fantasy X-2 for the first time, we all went gaga, simultaneously exclaiming YES with an open mouthed “Wha?”

The song is feisty, catchy and poppy in all the right ways. The performance is awesome, though very outside Yuna’s normal comfort zone. The lyrics are heavy with subtextual references with what transpired between her and Tidus and how she plans to face the future, knowing he will always be with her. Her music doesn’t just wow the crowd, it’s also empowering in battle and boosts stats. When the soul residing in the songstress dressphere flares up during a concert on the eternally overcast Thunderplains, the resulting melody causes the tormentous clouds to temporarily disperse allowing the sun to shine through. An event never seen before, or since. 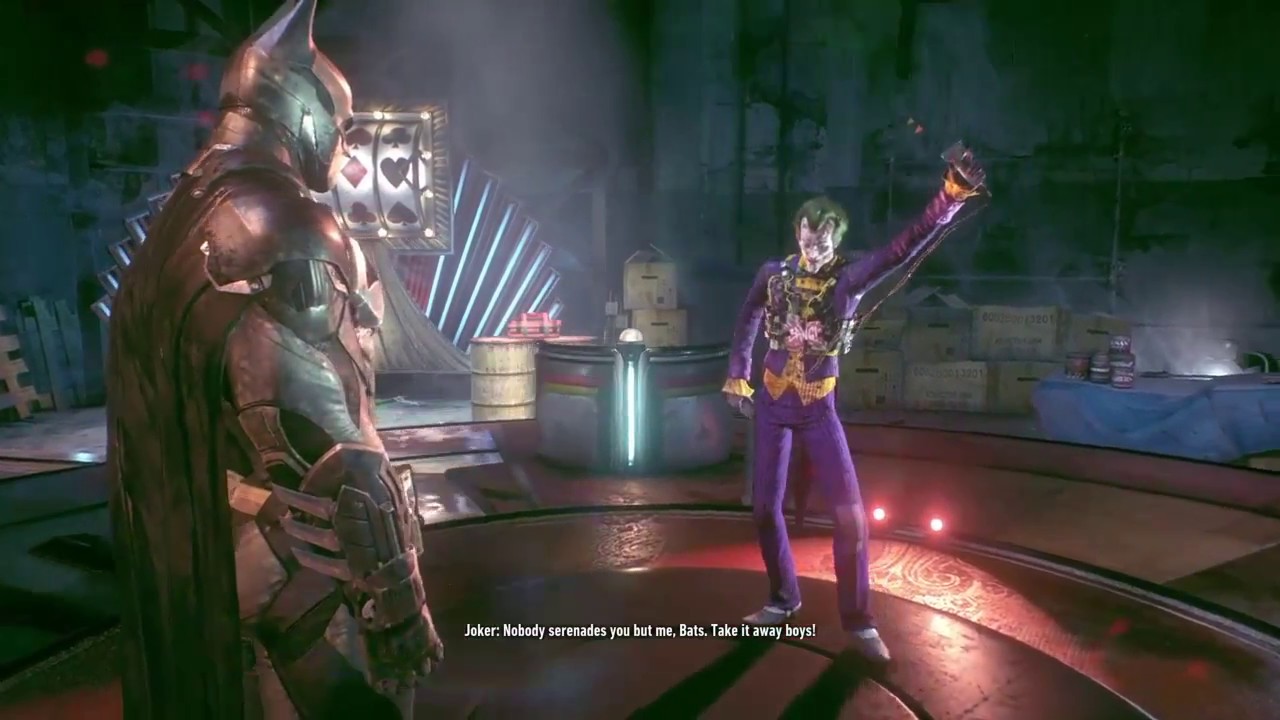 The Joker sings off key, doesn’t follow the melody, is the last person we want around when a bomb is about to blow and to top it all off, he’s already dead! When it comes to singing he does everything wrong. His technique is terrible, yet the performance so captivating it quickly became the greatest song to come out of a Batman series since the “Birds of Prey” song from Batman: The Brave and the Bold. He sings with such humour and vivacity, such vim and vigour,  you almost forget for a moment that he’s dead. Batman has a lot of problems, though his most serious one was the time in Arkham Knight when a mixture of the Joker toxin in his veins and Scarecrows fear gas caused him to hallucinate the Clown Prince of Crime back to reality.

You know you have an obsession when your worst nightmare can serenade you from beyond the grave. They say old jokes never die, too true in this case. This mental abstraction, though having no physical presence, could cause the dark knight to see many morbid manifestations. In this instance he steals the spotlight from another victim of the Joker virus. It’s one of the most memorable moments of the series and you gotta love the big finish.

Transistor – Red with “We All Become.”

Red, our sword swinging heroine, is mute, she cannot say a word let alone sing a note. A mute protagonist she may be, but man can she swing a sword. Look at that thing, it’s huge. Before everything went all white and blocky and the city of Cloudbank fell silent, it was a shining beacon of prosperity, both technologically and socially. Red was the talk of the town, a siren of song, a super celeb worth her weight in hashtags. On average a song usually lasts over two minutes, but just because a song is short doesn’t mean its not good. “We All Become” sung by protagonist Red, just before she was permanently muted, steals the stage with a solo lasting a mere minute and 6 seconds, and still a sensation. That says a lot about her star power.

There is a longer version but it’s in game we’re talking about. With makes it so great is how it is so heavy with foreboding. The lyrics drip with rebellion and warning. “Every word a defiance… think I’ll go where it suits me… before we all become one… Run!” Seeing as this basically explains the secret plot of the Camerata to digitise and entrap the entire population in their private servers, small surprise they attempted to have her silenced. They failed and with the loss of her voice and her lover, she begins to express herself through more heavy handed means. Again, big honking sword.

The Aperture Science facility conducts some of the most advanced and innovative research  imaginable. It’s been said that anyone can sing, in games however it might be more accurate to say anything can sing. GLADOS is an intelligent mass murdering AI constructed conclusively to control the complicated commotions conspiring in the circuitry that is Aperture Science. She is very good at what she does with ruthless efficiency. Patience is on her side and she revels in tormenting her test subjects with varying degrees of physical and mental torture. With her witty quips she steals focus at every turn, even going so far as to have her own synthetic solo at the ending credits of both games. It’s neither of those that we are here to talk about. Upon defeating Wheatley and preventing the facility from blowing sky high, Glados comes to a moment of clarity and decides to not kill chel anymore, to release her to go free into the world and live her life.

Though she doesn’t sing this song herself, there is no doubt that she is responsible for it’s conception. As a tribute, she has all the bullet happy turrets that have been trying to riddle you with holes at every opportunity, to give unto thee a musical send off. Presenting the The turret opera. CLIP. You can’t help but be touched by the soothing synthetic symphony sung by one of your biggest obstacles in traversing the test chambers, as the lift ascends to the surface and freedom.

Theres a link to the full song with a translation of what the turrets are actually singing in english. A must watch for portal fans.

Those were just seven sensational singers in video games. Perhaps you know some more chipper tunes? Which video game songs populate your playlist. Let us know in the comments section here on YouTube, or send us a note on one of the social media links listed in the description. We won’t judge your musical tastes, as the saying goes, everyones a critic.

AND for some live streaming Gameplay: