Finding your next video game can at times drive you nuts. Game shops, discount bins, surfing through websites can become a pursuit of insanity. Here we present a game that promises to be a true descent into madness.

Based on a Celtic myth, Hellblade: Senua’s Sacrifice follows a lonely warrior who has lost everything and everyone she cares about as she descends the dark paths of her own psychosis. You know when people speak about fighting your inner demons, she takes it literally. There’s more than one voice echoing through her cranium that both help and hinder her. There’s a striking  beauty to the world she inhabits, with enchanting landscapes and fortresses to besiege accompanied by a captivating orchestral score. At least it all seems beautiful until it is twisted into a suffocating nightmare of harrowing sorrows.

Everything about Hellblade is unstable, unpredictable, unbelievable, uncertain and we love it! Apart from pitting herself against adversaries 20 times her muscle mass she must constantly battle her gravely inner voices, one of which comes from a skull in her satchel, and constantly questioning the world around her. At least against the brutes, who believe bones are the height of style, she stands a good chance as long as her speed can outmatch their strength. Reality and mentality repeatedly overlap. Something to note about the mechanics is that you won’t see any HUD. No health bar, stamina meter or mini map littering the screen. Rather than playing the adventure as a gamer, developer Ninja Theory want you to become Senua and experience every step of the journey through her perception of events. 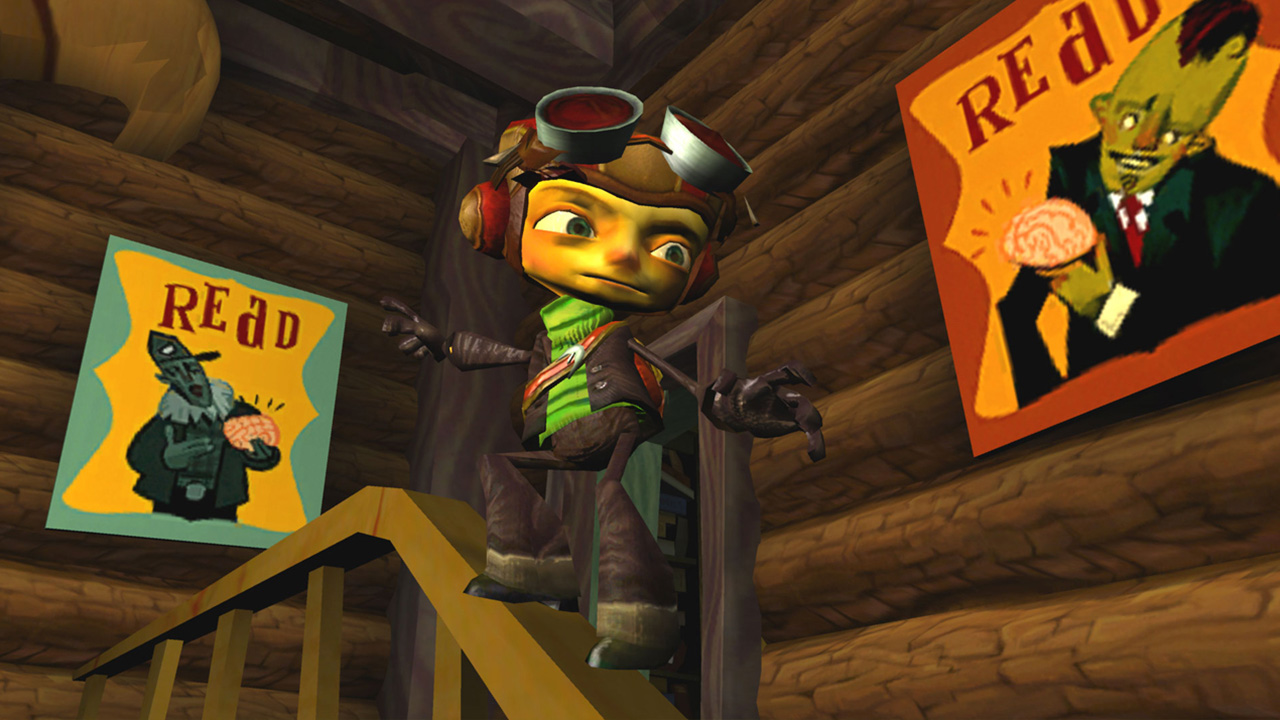 Tim Schafer’s Psychonauts takes place in Whispering Rock, a camp that teaches children the powers of mind over matter. Trained by the best government agents to be the cream of the crop in psychic warfare. Through his lectures Raz and his friends learn how to harness their mental might and literally enter the minds of their enemies, though he does get to practise on his friends and teachers first. Raz is on his way to becoming a great psy-cadet but he soon discovers that something sinister is underfoot as his classmates keep turning up empty-headed, literally.

His investigation leads him to an abandoned Asylum over run by the inmates, each with their own specific mental malady. On top of dealing with the mystery of the missing brains, you have to sort through the mental baggage of a post man obsessed with exploding milk, an artistic matadore and a giant fish monster named linda. You’ll never look at sushi the same way again. Melding of the minds usually refers to the spark of brilliant ideas. Here it just results in a scary butchery circus. Whatever dangers lurk in the depths of the ego, more than likely they’ll be after you. Dangerous and quirky. Good times.

Tamriel is a world of fantasy, where anyone can be whoever they want to be; a powerful mage, a champion of the arena, a master thief, a murderous vampire assassin. All interesting career choices. The region of Cyrodil is a wide open world with so much to explore. I reckon there’s only a handful of gamers in the whole world who have completely discovered everything it has to offer. If you have the DLC, you will hear rumors of a mysterious island with a suspicious three headed monolith pertaining a gaping maw of daedric energy.

Dare to step through and, a short interview and butterfly shower later, you have arrived at the Shivering Isles, Daedric Lord Sheogorath’s personal pocket dimension. The island is split into two halves of dementia and mania reflecting the Sheos’ fractured outlook on reality. The other inhabitants aren’t any better. Upon meeting the god of madness himself, he recruits you to protect his realm and defeat Jyggalag, the Daedric Prince of Order and avert the coming invasion of Sanity. Its either that of risk Sheogorath’s wrath, which could include dismemberment, turning into a chicken, or being naked for all eternity. It’s better just to roll with it. With no super powers to speak of, unless you include mountains of money and a Butler, Batman possesses ample experience dealing with the scum of the streets. It takes a dedicated mind and iron will determination to raise yourself to his level of physical and mental refinement and not break like a face in the way of his fists. Ironically, the man most capable of reigning in Gotham’s circle of psychos is himself haunted by the phantoms of his own guilt and repressed trauma. To be fair, with all he has to deal with every night, he’s earned the right to go a little batty. Overcoming crazy challenges, mental gymnastics, hallucinations, scouring every inch of the city for a ridiculous amount of riddle trophies is enough to drive anyone through the wall.

Yet it’s  a chemical mixture of Scarecrows fear toxin and Joker venom that sends him over the edge. Now the unceasing taunts of the Joker are his constant companion and he is forced to relive the most  prominent tragedies of his failures. The weight of his losses threaten to overwhelm him. If the Batman succumbs to his encroaching madness, the toxic concoction poisoning his very soul, will unwittingly give rise to a whole new Batman, or worse, a new Joker.

Max Caulfield is an average teenage American girl. She has a hobby, an arch nemesis and doesn’t pay attention in class. Everything changes when she witnesses her childhood friend gunned down in the girls toilets. The trauma unleashes her latent ability to rewind time, granting her the power to turn back the clock. She can use it to break into places she shouldn’t be, fly drones and become everybody’s best friend. She gets the chance to really do something good when her awesome blue-haired besty Chloe seeks her help to find the missing Rachel Amber. Having averted suicides, spawning parallel universes and saving Alyssa Anderson repeatedly, life feels pretty good. It’s almost worth the headaches and the nosebleeds.

After a few weeks of screwing up the natural progression of history to do her friend a solid, it’s not surprising that time starts messing with her. When a Tornado hits her town and she needs her powers most, It all becomes a chronological madhouse. Max gets thrown through a chrono loop of trouble where nothing makes sense. Trapped in a surreal landscape where collecting beer bottles is a good idea, for some reason, Max must wind her way through this temperamental timeframe or be stuck in the madness of high school forever. Alice Madness Returns is so messed up, Madness is actually in the title. Though the first game was weird enough, this one takes the biscuit as Alice’s sanity and grasp of reality slowly slips further and further away. Alice has had it tough, especially for a child. When her family perished under questionable circumstances, the trauma sent her into a coma. With only occasional bouts of consciousness, she spent two years in a horrific 1870’s Asylum until Doctor Bumby took her on, teaching her to forget her past in order to be well enough for society.

While wondering around victorian London and sleuthing for the truth behind the fire that killed her family, Wonderland is deteriorating into a frenzy of mindless destruction, senseless violence and oozing puss babies. The inhabitants are all suffering from the instability as a wild train of thought threatens to derail her sanity. As she delves deeper into the muck and murk, she worms her way closer and closer to the dark truths of her past and the fire that consumed her family. Memory has a price and the truth will only cost her her mind.

Jackie Estacado is a wealthy mafia crime boss who has it all. He is charming, handsome, rich, powerful, indestructible and host to the Darkness, the most evil conniving insatiable primal force in the entire Universe. His life goals are straight forward; win the battle for supremacy of his own soul and get revenge on the asshole currently attacking his family. With regeneration powers, some nasty heart eating tentacles and a British Darkling helping him out, victory seems assured.

Mental instability can be brought on by intensive trauma. I don’t know about you but I would certainly class dying as being very traumatic. In Jackies case, being the living embodiment of everything profane and unholy, it’s hard to say if death is really the end. Until he gets shot in the head. He wakes up in a mental institute, where all the inmates and staff are played by pivotal people of his apparent made up fantasy world. Is he really the avatar of omnipotent power, or just a little screwy?

Most maddening of all is the Nurse represented by Jenny, who coincidentally was also shot in the head. The story in both interpretations of reality continues to climax, resulting in two possible endings for the game. Which reality do you choose? The one where you shrug off your delusions of grandeur and dance intimately with your soul mate? Or the one where you dive heroically off the roof into the jaws of hell to wrestle with your inner demons? Like that’s even a choice.

When a game we love finally hits the shelves its normal to go a little gaga. Who ard your favourite psychos? What video gaming plots made you go “wtf” like nobodies business. Share your favourite moments of madness in the comments section and subscribe on YouTube. You’d be mad not too.