The games of the Far Cry series all deal with combating an all powerful organisation out for their own gain. Far Cry 3 was drug lords. Far Cry 4 had a political agenda. In Far Cry 5, it looks like the enemy has a video game religion on their side.

Set in the aptly named fictional town of Hope County in Montana, this first person action shooter adventure by Ubisoft pits you against Joseph Seed and his congregation of Eden’s Gate. Joseph  believes it is his divine role to save Hope County from inevitable devastation. To fulfil his holy task  Joseph and his followers, dubbed the Heralds, are determined to enforce their faith down the barrel of a gun. It’s a worship the lord and saviour, or else, wether you like it or not kinda deal.

They have taken over all the towns in the county and hold the citizens in a grip of doctrine and fear. As a deputy Sheriff it is your duty and your mission to liberate the innocent from these zealous despots. There’s bad days in every job I guess. Luckily you are not alone. You can employ some hired help, which you can position for a strategic takedown. Prepare a sniper for a sneak attack. Call in a pilot to rain down your own brand of justice. And a dog with a bite far worse than his bark.

In general religion can be a very good thing. It can bring communities together, inspire hope and help a lot of people in need of solace. On the other hand we have some prime examples of dishonesty and corruption. IGCritic now presents some Video Game Religions you should avoid.

Devil May Cry 4 – The Order of Sparda Devil May Cry 4 focuses on protagonist Nero, a soldier in the army of the Order, a religious sect who worship an exiled demon as a holy saviour. As worshipping goes, any cult that would follow a demon is sure to arouse more than a few suspicions. But what if that demon was the Legendary Dark Knight Sparda, betrayer of Evil, saviour of humanity and scourge of demon-kind. You’d be forgiven for thinking “oh, these guys are alright really.” The reverent hymns, the gothic architecture, the whiter than white robes all convey a sense of trust and divine protection.

Scratch beneath the surface and you will soon discover mad scientists splicing humans with demonic energy, secret plots and corrupt leaders abusing their power, politically and literally. Using demonic energy they gather demon arms (weapons) to enhance their own strength and consolidate their power over humanity. What a bunch of thieves and hypocrites. Yet on the upside this video game religion has given us the motorised blade.

The planet of Lunar and it’s sister the Blue Star were created and protected by the grace of Althena and she is worshipped for saving humanity in it’s hour of greatest need. She is reborn in human form every generation or so to offer guidance and to balance the powers of both the blue and silver star in times of conflict. Her church of followers exist in every town to aid the community. The Priesthood of the Goddess is happy to heal the wounds of travellers with Althena’s blessing, for a nominal (cough) contribution. Their doors are always open and welcome all newcomers to participate in the joining ritual. All that is required is the ingestion of a tasty non-suspicious red beverage.

Lucia, a close personal friend of the Goddess herself, comes from the blue star bearing bad tidings. A terrifying evil, Zophar, has returned to plague the citizens of Lunar and without Althena’s intervention, the world is sure to perish. Completing her quest to find the Goddess she recieves quite a shock. That’s right, the Goddess currently residing in the Holy city of Pentagulia is a charlatan in service to Zophar and her closest followers are nothing more than blood drinking, child stealing, power grabbing, magic mongering villains brainwashing the populace by feeding them tainted blood and lies. So many lies. Most evil of all, they are so stuck up.

God of War – The Pantheon 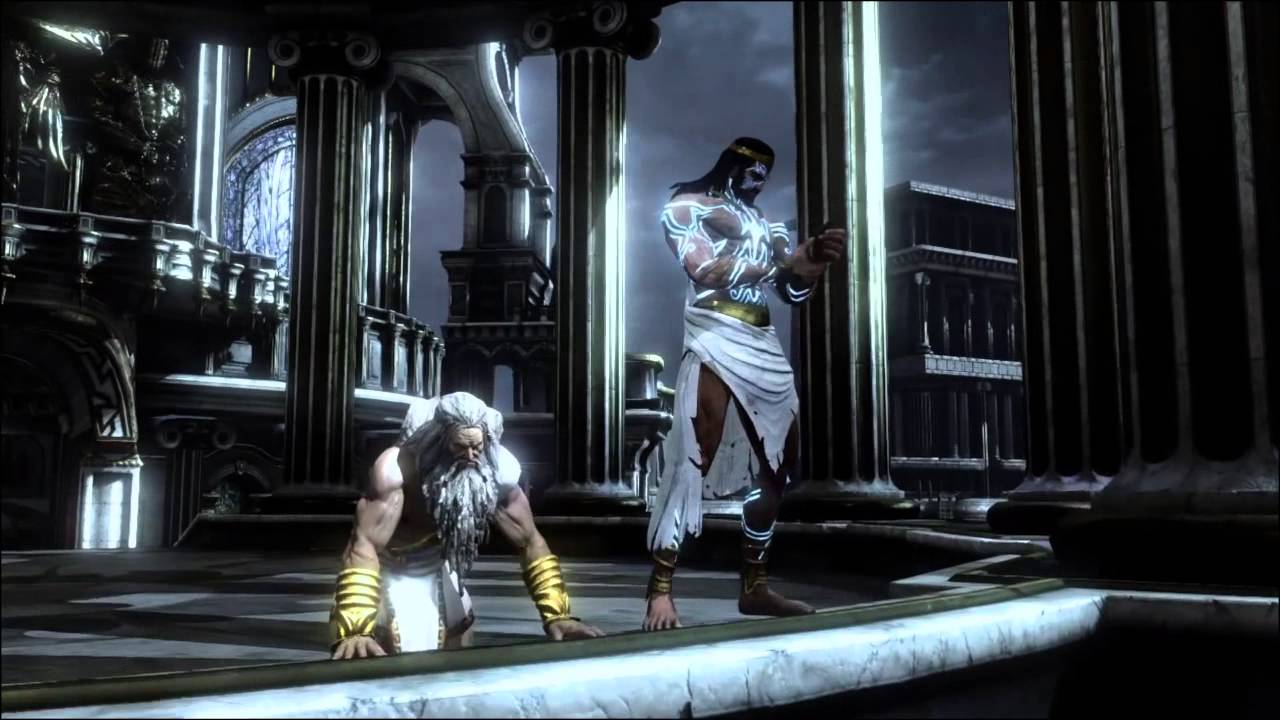 The God of War series is a perfect example of Gods Gone Wrong. Though the gods maybe pretty quiet these days, in the time of ancient Greece many proclaimed to commune with the holy pantheon. The Ghost of Sparta, Kratos, in particular had cause to bend their ear on a regular basis. He sold his soul to Ares, the God of War for the power to smite his enemies and smite he did. It was the start of a shaky unstable career path that seemed like a good idea at the time. After faithfully serving the gods for 10 years Athena promised to forgive him his sins and cease the nightmares that plague his soul over the guilt of his burdening transgressions, which they didn’t.

Well Zues is the King of the Gods and a king is only as good as his word. He gifts Kratos the blade of Olypus to drain his powers to “unlock his full potential.” Zues then kills Kratos. So it turns out all the inhabitants of Mount Olympus are lying scumbags. Surely Zues’s ancestors the Titans should be more honest. I believed them when they promised to aid in Zues’s demise. They let him fall of a mountain instead. Fine! We tried to give them the benefit of the doubt but all immortals are vengeful, spiteful, sarcastic, paranoid and in some cases, drunk.

Spira is a land gripped in turmoil as the ever looming threat of Sin keeps the whole world in a constant state of fear. There is always the possibility of a summoner completing their pilgrimage to find the final aeon, defeat Sin, and bring the calm. A time of festivities and frolic, where everyone can sleep soundly without terror that they could be killed by a giant magic whale. This is sadly, a short respite before his return and he always returns. Aside from the revered High Summoners, who give their lives to stop Sin, faith is all these people have. Such has been the way of things for a 1000 years. The belief is that Sin is punishment for the crimes of their ancestors, luckily the lessons Yu Yevon laid down pave the path to redemption. The teachings of Yevon are fairly simple to follow:

Follow the way of Yevon and Sin will be no more, but in actuality, the opposite is true. Yu Yevon is Sin! He’s been Soul jacking final aeon after aeon with the single minded intent to remain alive and attack any area of technological advancement. By tabooing machina the meisters keep people dependant, denying them the ability to advance and prevent another war. They allow the destruction of innocent lives to prevent war that could cause the destruction of innocent lives.  There must be logic in this video game religion somewhere. The Deities of Tamriel are divided into the benevolent Aedra and the sinister Daedra. Luckily the daedra are all sealed away in their own personal pocket dimensions of Oblivion. We use the word “sealed” very loosely here. The magical dragon fires don’t do much in the way of preventing their interactions with humanity, just limit their ability to physically manifest on our plane. The Mythic Dawn is a cult that worship Mehrunes Dagon, Prince of Destruction and the enemy of mortality. The first leader of the Mythic Dawn was Mankar Cameron. He began his reign when he received the Mysterium Xarxes, an occult book, from Dagon himself. To be included in this selective group you must first  prove you are worthy by completing the initiation ritual.

This requires gathering all four tomes of Commentaries of said Xarxes and deciphering the hidden message to reveal the location of the shrine. For all your hard work solving puzzles you earn the password that permits entrance into your new brotherhood. To join up takes more than turning up in a set of red robes. A life must be sacrificed to Lord Dagon, fulfilling his blood thirst. By killing the emperor and his heirs they weakened the mythical dragon fires responsible for separating Tamriel form Oblivion. This allows the opening of the oblivion gates, permitting the forces of the deadl ands to invade Tamriel and Lord Dagon to rise and wreak havoc over Cyrodil once again. Bad times.

As towns go Silent Hill is one tourist attraction you may want to leave off your “must visit” list. Trapped in the town and unable to leave, Harry Mason must find his daughter and piece together the mystery through his encounters with a cop, a loony lady and hospital worker Lisa. With Day turning to night at irregular intervals, constant snowfall, decadent buildings and giant insects, they will need all the religious help they can get. Having said that there is the Order. Nothing is ever explicitly revealed about this doomsday cult. The order is mysterious but seem to have their hand in every unusual happenstance in Silent Hill. That’s a lot of happenstances.

Zealous doesn’t quite cover it. they believe in a god that will return to destroy the world, so that humanity can begin anew with a clean slate. Dhalia Ghellespie is a follower of said order and has worked with other members to reincarnate their dark lord. The mark of Samael keeps showing up in the strangest places and needs to be completed to seal the town to the abyss, which is a lie. Dhalia’s daughter Alessa is pregnant with a male child. After being burned to a crisp, she is kept alive by her supernatural progeny, trapped in a never ending nightmare, unable to birth her offspring. Alessa’s astral projection places the magical seal around the town to prevent her child’s birth in the hopes that she can finally die. Going to church on Sundays doesn’t seem so bad now does it?

Fallout 3 – The Church of the Children of the Atom Where most of us would leg it the other way, these folks don’t even bat an eyelid, instead praising their good fortune at its presence, anticipating the day it finally goes boom. They’d like nothing more than to have their own atoms split in a radioactive wave of holiness, bringing them closer to their God, Atom. Lucky for them there is a side quest you can take that allows you to give them their fondest wish. Ah, I hope they’re happy now. 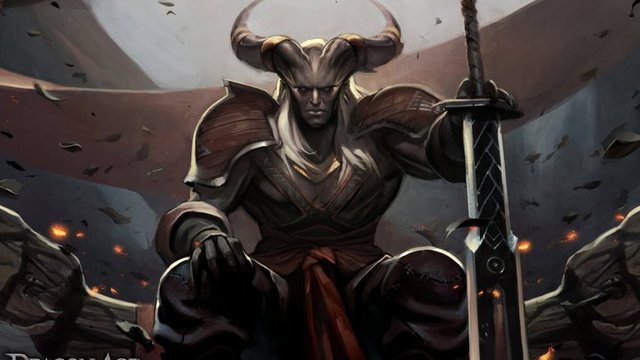 A land as big as Thedas plays home to a few spiritual powers. The chantry of Andraste, The Tevinter Imperium and possibly the most dangerous of all, the Qun. What makes them dangerous is that, while they do not bow to any mythic deity, their belief is unwavering and doesn’t require anything other than their faith in the Qun. The horny grey skinned race of the Qunari are raised from birth, instilled with their teachings from an early age. Outsiders of other races are rarely excepted but it does happen. There is no individual, only part of a whole. According to their doctrine, everything and everyone has a specific purpose, place, a specific role to fill in the society of the Qunari.

The Qun is more than belief, it is only understood and it is the duty of all Qunari to forcibly teach those who do not understand. They don’t conquer lands for glory but for enlightenment. They have their leaders, thinkers, and soldiers. In their eyes you are either Qun or Talvashoth, a name for those who don’t follow the Qun. They have no names at all, referring to each other only by their profession in their language. In joining the Qun you maybe find acceptance, maybe, but say goodbye to any sense of individuality.