Dragon Ball FighterZ and the Best Fighting Games of 2017

Fighting games. Over the summer we’ve seen some hard hitting ones on all consoles. With the never fading popularity of the Dragon Ball TV series, Bandai Namco are developing a new great fighting game:

It’s time to blonde up as Dragon Ball Z gets another go at gaming. The Dragon ball series has had more game releases than Cell has spots and just like a Saiyan that keeps getting resurrected, they just keep getting better. The games, not his spots. Every Dragon Ball game is all about fist fights and Ki blasting. This arcade style 2.5 D beat em’up is no different. Matches can be up to three a side and during the encounter you can swap fighters in and out on the fly to shake up your fighting style. You can call in your team mates for assists to rack up some ultra combos. Speaking of three man teams, you can even combine all your powers for an ultimate team attack. Play through the epic locales of the frieza, cell and Majin Buu saga.

Ultra moves wreck the stages in waves of devastation. As you pile on the punches on planet Nakek, the buildings give way to columns of molten lava as the planet approaches destruction. We’ve seen Golden Frieza and Super Saiyan God Super Saiyan Goku and Vegeta have been confirmed so it’s more than likely that the latest battles from the DBSuper series will be enacted alongside the classic epics we all know and love. The World shaking clashes and in battle transformations will be available on PC, PS4 and XBox One sometime next year in 2018 and there is currently a petition to port it over for the Nintendo Switch.

If Goku and Vegeta ever went all out in a final battle, who do you think would win and why? Goku has power. Vegeta has cunning. Both have too much Saiyan pride. Post your thoughts in the comments section here on YouTube.

There’s a lot to like about fighting games: the colourful costumes, the thrill of victory and taking out our frustrations at daily life by pretending your foe is someone you don’t like. C’mon, we both know you’ve done it. If there’s one thing that can make fighting games and their rapid, punch action, ultra-moves more awesome, it’s when they are done by our favourite pocket monsters: 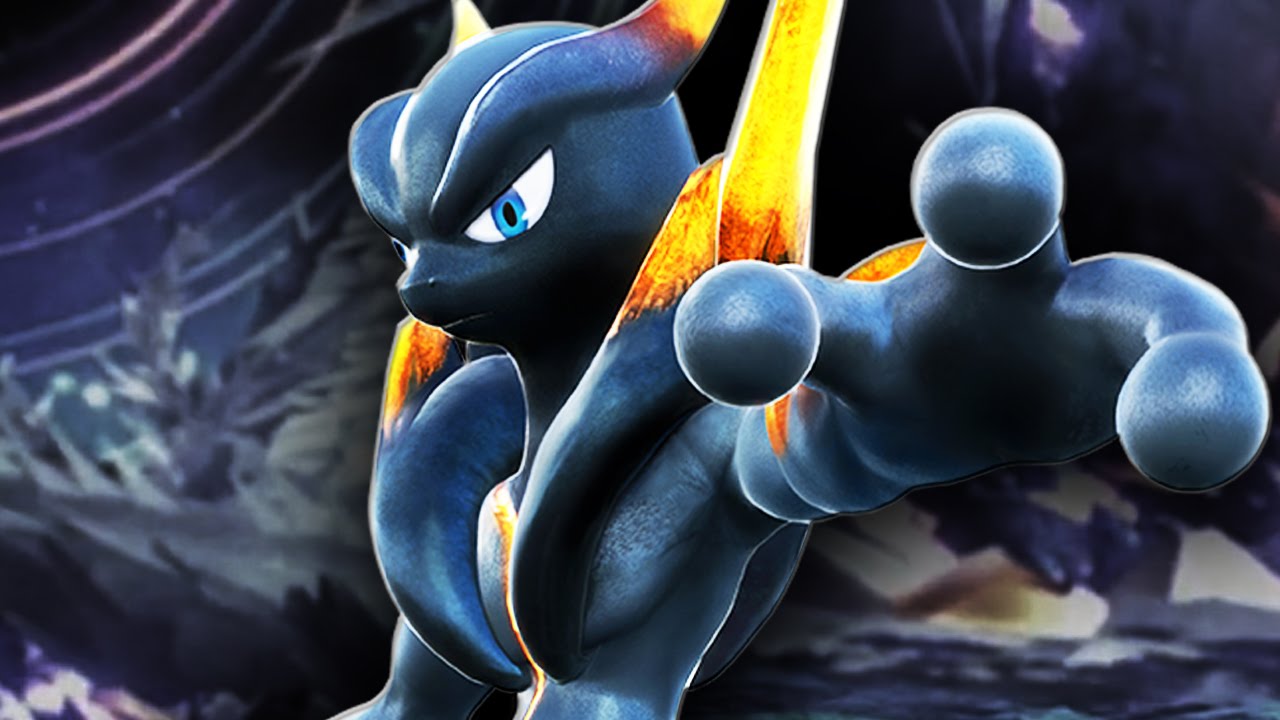 Pokemon of all breeds and evolutions have been battling it out in every game since 1996, but never before have they entered a 3D circular arena to rack up a combo of button mashing glory. Bandai Namco, the developers behind Tekken, and The Pokemon Company joined forces in 2015 to provide a fresh perspective on what a  “Pokemon Battle” could truly be. The initial title was released in arcades and this year it comes to the Nintendo Switch. Pokemon are finally free to roam the 3d fields of battle as they go all out head to head like never before. Not being constricted to the familiar turn based battle system, the combatants can now jump, dodge, grab and blind side opponents with their unique moves and abilities.

Causing and receiving damage will build up the synergy gauge to activate a burst mode which may turn the tables if you can time it just right. Synergy mode activates mega evolution for certain species and grants the use of a powerful burst attack. The roster holds 21 pokemon to choose from including Blaziken, Suicune, Pikachu Libre and the exclusive Shadow Mewtwo. Don’t forget the added support from other Pokemon that may assist in attacks or by applying special beneficial statuses to you, and negative effects to your opponent. 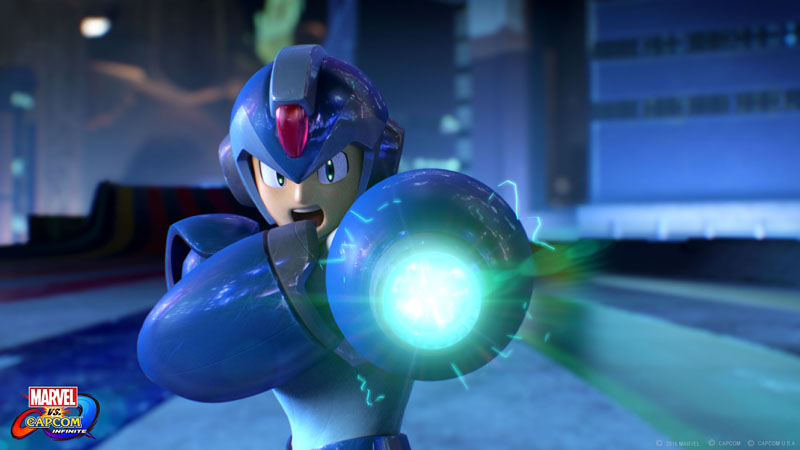 Capcom and Marvel team up for yet another cosmic clash. Megaman X villain Sigma has fused with Avengers foe Ultron using two of the fabled infinity stones, namely reality and space, to form a new mecha monstrosity. Ultron Sigma is out to destroy… well, everything really. He’s created a cybernetic virus that can infect biological matter and wipe out, as he calls it “the cancer of organic life.” Harsh. The Demon Jedah has also concocted his own plans and has been messing around with some symbiotes, as if they weren’t menacing enough already.

It’s up to the rallied heroes of both Universes to band together and put the smack down on the opponents in their way, be they  foe or friend. CGI cutscenes have been tastefully rendered for the story mode and pulls ideas from each characters backstory, utilising every spark of star power. Expect some cooky yet kickass team-ups; Chun Li and Hulk, Arthur from Super Ghouls and Ghosts and Doctor Strange. Can you imagine Thor and Dante on the same team?! Let the carnage commence.

Thanks to Kryptonian technology in the form of super vitamins, every hero and their cat can battle on equal footing with the best of the meta-humans. Therefore even cooler human heroes like Green arrow can go toe to toe with Black Adam and stand a chance of sending him to the big phantom zone in the sky. Picking up where the first game left off, the alternate evil Superman is still incarcerated in his parallel world. Batman has certainly applied his scowling skills to give the corrupt Kryptonian a serious telling of. I imagine something along the lines of, “Bad Superman. Bad, bad Superman. Naughty.”

With Supes out of the way, every villain is out for all they can get. Grodd has formed his own society to aid in his global conquest and Brainiac is planning on taking full advantage of the upheaval. Brainiac considers himself a collector and some Earth cities would look so beautiful in a shiny glass jar. With danger on all sides, Bats needs to keep his friends close and his frienemies even closer. As fighting games go, It’s gonna be one super showdown.

Nintendos’ latest innovation: taking the safety of facing a virtual opponent and getting you to stand up and physically flexing your fists. It’s crazy, colourful and oodles of fun going through the motions of dodging, blocking and swerving attacks. You and your foe can face off literally face to face or keep it old school, joypad style and enjoy the battle on display, enjoying the colourful sprites onscreen. Each character has three sets of gloves that apply different attributes to their punches.

One set is a balance of power and speed, another is for haste and evasion, the last trades swiftness for strength. Every fighter comes with their own special pizzaz and characteristics. Ninjara is an expert evader and teleports away in a cloud of smoke, even from a blocking stance. Master Mummy is slow on the uptake but can self-heal when he blocks. Ribbon Girl can jump 4 times before needing to touch down. She’s really spry. Taking on one opponent not challenging enough, try a 4 way fight between friends or the AI in one of their various play modes. Another fighting contest that began in the video game arcades, is the Tekken series by Bandai Namco Entertainment. Tekken 7 is actually the ninth instalment in the series and will expand even further on the conflict between Heihachi and Kazuya. The story mode promises to round off all the intrigue, aggression and betrayal. So much betrayal, and most of it involving being thrown off a cliff. New to the gameplay is the Rage Art, a frenzy that boosts players critical attack, and Power crush, which allows you to continue your combos unimpeded even while sustaining hits from your adversary.

In standing tradition with fighting games of the series, this title features special guest star Akuma from the Street Fighter series. With 39 characters in total to choose from, you’ll be spoilt for choice in mastering a particular style.They all have their hang-ups, wether they be half devil, an android or just a Panda. Returning fan favourites and new contestants alike are sure to make an impression. Just look at Lucky Chloe. With her kitten themed costumes and dance style technique. How can you hit her? She’s too cute. 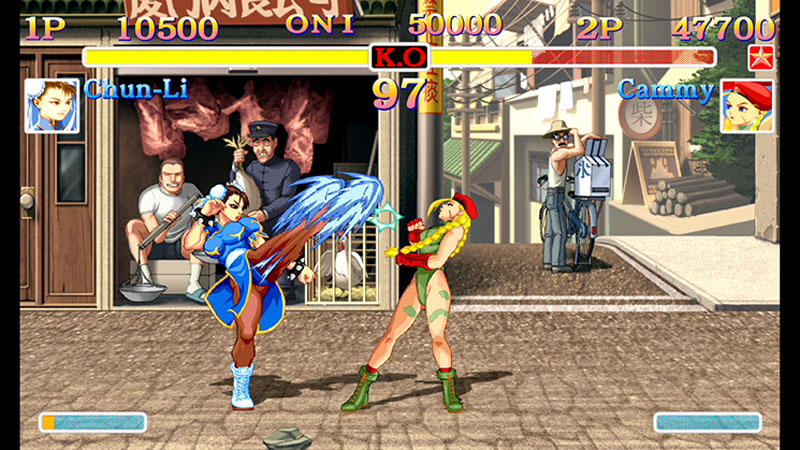 The original version of Street Fighter II was initially released back in 1991 in the arcades as “The World Warrior.” Since the first days of needing to leave the comfort of your home to play video games with your mates, Street Fighter II has been re-released more than six times for various platforms and now, 26 years later, it hadoukens it way onto the Nintendo Switch. Imagine it; all the characters, all the midi format music, all the exclusive extra dlc, classic and contemporary, compressed into one turbo charged adventure the size of a sim card.

The games for the switch are so tiny but so impressive. There are 19 challengers to utilise, including Evil Ryu and Violent Ken and a hidden character just waiting to be found. Go retro and play in pixel mode or stick with the new generation graphics for a sleeker looking conflict. The advantage of the switch is you can play 2 player locally or online so if you fancy a street fight, you’ll never be left wanting.

The characters of a good fighting game need skill, strength and the ability to shout the name of their best techniques while doing it. Sometimes thats not enough, sometimes you just need power:

The graphics actually look pretty decent considering it’s made for tablets and smart phones. It has to be noted that the gameplay is not the same as playing fighting games on a console. There’s more swiping, less button mashing. In game purchases are optional but where’s the fun in that. It’s one of those games where the more you play the more you get out of it. The more time you invest in the various arenas, the more Zeo shards you can collect, which you need to unlock your main characters, upgrade their skills and call in assists from your fellow rangers.

Timing is key as combos can be interrupted, blocks can be broken and anyone can be dazed if hit hard enough. As with most freemium games you don’t choose who you unlock but it does make it more exciting when you do earn your favourite colour. This is a game we would like to see built upon and ported over to console. The Power Rangers use martial arts in all their incarnations and are just begging to become an icon in the fighting game genre. Throw in a story mode with some colourful cutscenes, some button mashing combos and some quippy one liners and this good iOS game could make a great title for console.

There are loads of fighting games to contend for the titles of toughest Video game combatant. In your opinion who is the most ferocious video game fighter? Who gets your vote for being the baddest brawler? Let us know in the comments section here on YouTube.