The 7 Deadliest Damsels in Video Games

IGCritic presents The 7 Deadliest Damsels in Video Games. There will always be a princess in a tower, but these days, as it says in the song, sisters are doing it for themselves.

In video games there are many instances of ladies in constant need of rescuing. Princess Peach, Zelda, Aeris from FF7. On the flip side there some feisty female protagonists who need no help escaping life threatening situations. They don’t just face the danger. They are the danger. We trailed through many adventures to find these femme fatales, and here are our most dangerous seven: 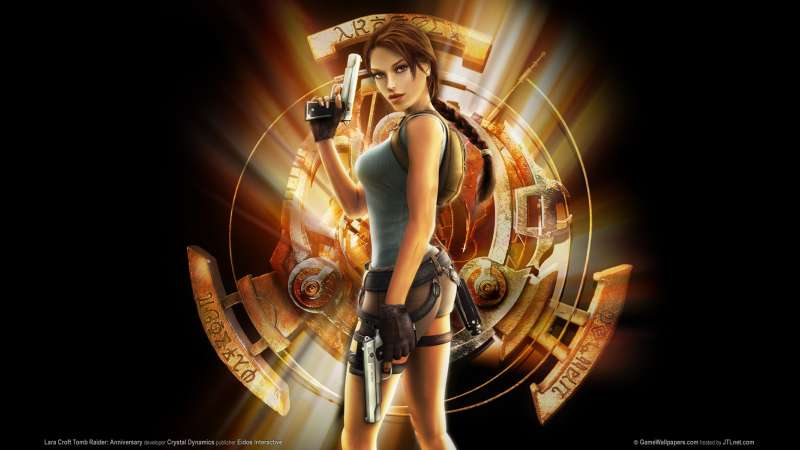 Before this slip of a girl went around demolishing every ancient ruin she could find in explosions and floods, she was actually a professional archaeologist. Yes, believe it or not she truly cared about discovering and preserving long lost civilisations and artefacts. She knew more than a thing or two about protecting them from the armies of corporate henchman wanting to use the magic of the old world for personal gain.

On top of being a skilled gymnast and adept in every extreme sport we have a name for, including swan diving off the great wall of China, she was uncannily capable in using any type of gun she could get her hands on. If it had a trigger, it was her toy. From her iconic dual pistols to harpoons, to uzi’s, to rifles, to grenade launchers. Generations of baddies fell before her in droves of bullets and blood, and yet not a scratch on the temple walls. The sanctity of human life may not matter, but history is in safe hands… Sort of.

Trish from Devil May Cry This blonde bombshell from the Devil May Cry series is even saucier with a sword, especially when that sword is Sparda, named after it’s dangerous demonic wielder. Big blades aside she can fire yellow energy blasts from her hands, is a nimble as a nymph and more than dangerous enough to keep up with Dante. She makes her first appearance flying in from the moon and introduces herself to Dante by throwing a motor cycle through his office wall. You gotta admit it, that’s charismatic. She resembles his deceased mother which understandably throws him for a loop.

Turns out she was created by the Demon King Mundus, with this appearance in mind to unsettle the son of the saviour and lead him to his demise. Her whole existence was made to be one of servitude and obedience. Until Dante, evil was all she knew. Yet from him she learns compassion and even sacrifices herself to save him. By all rights she should be dead, yet she is durable enough to survive a direct hit from a Mundus eye blast. Now thats hardcore. Since proving herself she has been Dante’s proud partner ever since. When it suits her anyway. 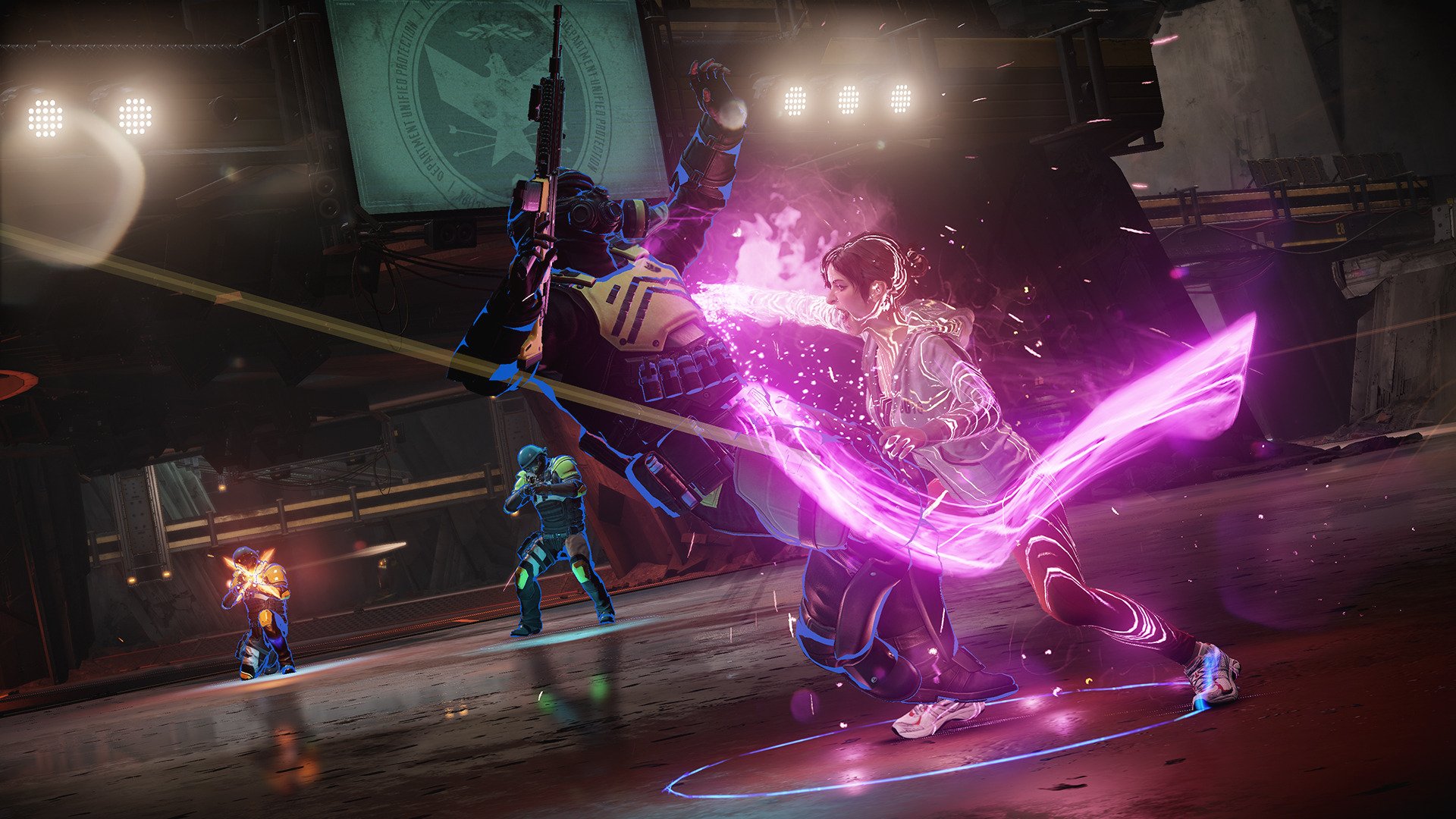 Being born a conduit in a world where people still fear anyone unique and different, it’s no small wonder she has a few trust and anger management issues. With constant attempts from the Departement of Unified Protection trying to capture her and use her skill set for their own ends, she has no shortage of outlets for her temper. She wields the Ultra deadly power of Neon, which is a lot more explosive and heavy hitting than you would expect from an inert member of the noble gases.

Thriving off the neon city lights, she is capable of some truly outstanding feats. She can whisk through the town at high speeds, propel up buildings as a cloud of lumens, fire luminescent blasts with pinpoint accuracy, and in her downtime, neon graffiti. Imagine how much she saves on spray paint. During adolescence she did have some trouble with her powers due to substance abuse, but big brother was always there to calm her down and keep her grounded. Until he was kidnapped, which did tick her off.

To say that Nariko, the star of Heavenly Sword by Ninja Theory, was unpopular growing up, is a vast understatement. Her only friend is an insane adolescent who’s hobbies include shooting soldiers with her oversized arrow cannon in a game she likes to call “twing twang.” Nariko’s clan is charged with protecting the Heavenly Sword, safe-guarding it for the prophesied reincarnation of it’s godly wielder. On the night of the gods rebirth into our world, Nariko was born, but the god was supposed to be male. Her chromosomes were perceived as a blight upon the world and so for her whole life she has been shunned and outcast, even by her own father.

One day, a greedy King comes to claim the magical weapon for himself, subduing everyone she has ever known, leaving her the last woman standing. So at this point she’s cursed, seriously frustrated, in possession of a giant godlike multi purpose sword, that would give even Cloud Strife envy, and then this guy goes and kidnaps her family. It’s like Taken if Liam Neeson had long ruby red hair.

Juliet Starling. She’s pretty, she’s popular and like many high schoolers, has a secret or two. She likes Lollipops, cheerleading and severing armies of the undead with her handy dandy chainsaw, which for some unexplained reason she’s allowed to carry around with her in school. She may be young, but she’s peppy, athletic and she knows enough voodoo hickery to keep a severed head alive! I went to uni and I still don’t know how to do that! The High School is dark, dismal and challenging, and that was before the zombies invaded.

Juliet has all the skills to combat the coming zompocalypse. Dismember zombies in a wave of confetti hearts, rainbows and blood using gymnastics, poledancing and the ability to speak fluent Japanese. Danger runs in the family, as each of her siblings are less than child friendly. San Romero High school is just the start as the entire town is cursed with crowds of creeping cadavers and all on her birthday too. Juliet, the fate of the world, rests in your pompoms. 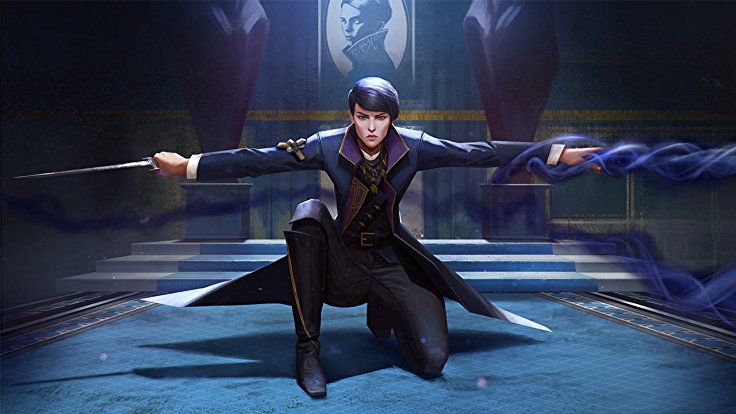 Emily Drexel Lela Kaldwin the 1st. Everything about this Empress screams danger and darkness, from her shady powers to her tragic origin. It’s the same old backstory. Young child is traumatised when her mother is killed before her eyes. She is immediately kidnapped as a part of a coup by assasins, kept in captivity as a political pawn in a reputed house of pleasure, yada yada yada. If suffering builds character, that makes her one capable ruler.

Usurped by an aunt she has never heard of, her father Han Solo’d (encased in carbonate for you non-geeks), she must use all her wits and her cunning to take back her Kingdom and dispel the threat to her people and her family. With the gift of the Outsiders mark she can get up to some doppleganger distractions or even shadowy slo-mo slice and dice. She is wily enough to bind the fates of her victims together. If one falls, so do they all. All hail the Empress, or get out of her way.

Batgirl from the Arkham series

By day Barbara Gordon is the science savvy, mild-mannered red head with a heart of gold. By night she becomes a science savvy, mild-mannered red head who punches really hard. So what if she doesn’t kill? She is so incredibly adept at what she does, that she doesn’t have to. She is so tech-tastic that on occasion she can take out her opponents with the push of a button. In her own dlc for the Arkham Knight, “A Matter of Family,” she must rescue her father from the clutches of the Joker and Harley Quinn.

She may be paired up with Robin but that doesn’t diminish her capabilities. It’s not “oh Robin, I need a big bad boy wonder to help me,” but rather “The Joker has my Dad. I am taking no chances. We will save him any way we can. Let’s go Robin.” Personally I think she should have called Nightwing. With nifty ninja skills and nerdy know how, she shows that anything boys can do, girls can do so much better. A comic book icon, long may she kick butt and no tragedy befall her… Sad times.

Those were 7 of the Deadliest Damsels in video games. What is it about strong female protagonists that you find so appealing? Can you think of any other femme fatales that should be listed here? Why not share your opinions in the comments on YouTube. After all, everyones a critic.